Innovate’s best selling wideband, the MTX-L just got better! The MTX-L PLUS is seven times faster and features our latest version of Advanced Sensor Control. Learn more about it here.

Some may consider a wideband air-fuel ratio gauge to be an unnecessary expense or a distraction on the dashboard. After all, there’s a sophisticated engine computer receiving data from one or more oxygen sensors and making corrections to the fuel delivery as conditions warrant.

But just as drivers of modified vehicles and competitive racecars have always monitored engine oil pressure and coolant temperature to avoid catastrophic failure of the moving internals, today’s more savvy enthusiasts are watching the air-fuel ratio. Much of their interest is focused on optimizing tuning, yet keeping an eye on the gauge may also help steer clear of any destructive consequences resulting from overly lean conditions.

“An air-fuel ratio gauge is almost standard practice for anyone upgrading a factory car with an aftermarket intake and exhaust. Also, if you’re installing a power adder or increasing the factory boost levels. Finally, any carbureted application will need this gauge,” says Felipe Saez of Innovate Motorsports. “They want to make sure the air-fuel is safe.”

A stand-alone wideband O2 sensor and air-fuel gauge, such as the recently released MTX-L Plus from Innovate Motorsports, doesn’t the replace of factory setup, nor does it share its data with the stock ECU.

“It works in addition to the factory sensors,” adds Saez. “But if you have a stand-alone ECU or datalogger [as in a full competition vehicle] you can tie in with the sensor output.”

Innovate Motorsports recently upgraded the industry’s best selling stand-alone wideband digital O2 sensor and gauge—the MTX-L. Now marketed as the MTX-L PLUS, the gauge features a large digital readout in either air-fuel ratio or Lambda. There’s also a programmable “needle bar” or series of green, yellow or red LED lights that can alert the driver when A/F moves into a certain range.

“You can dictate the colors for the air-fuel ratio,” says Saez. “At a glance you’ll know exactly which area you’re in.” 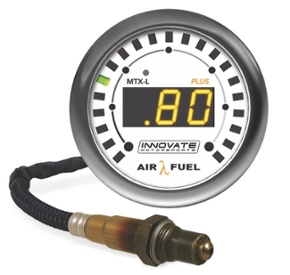 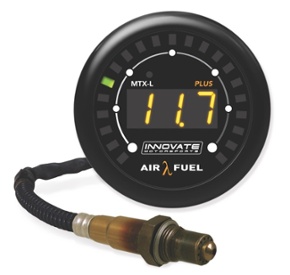 The MTX-L PLUS can display in either air-fuel ratio or lambda. Additionally, included interchangable gauge faces makes gauge customization a breeze.

The original MTX-L was released in 2009, but the new PLUS model is seven times faster with a four-millisecond response time.

“Not only do we display information quicker, but we can also output information quicker via the data logger or ECU,” says Saez, noting that engineers developed a faster processor and enhanced the software to take advantage of the increased speed. “We were able to increase the sensor frequency, and we get feedback from the sensor seven times quicker.”

The advantages of a wideband O2 sensor are not disputed. Many factory applications come with narrowband sensors with a 1-volt range that are capable of only telling the ECU if the air-fuel mixture is lean, rich or the correct stoichiometric calculation, which often is referred to simply as “stoich.” That term refers to the optimum chemically correct ratio of air and fuel for a complete burn or combustion. Automakers use narrowband sensors because they’re cost effective and the ECU doesn’t need to know any more information other than rich, lean or stoich.

Racing and high-performance street applications, however, need exact air-fuel ratios down to a tenth of a decimal for tuning purposes. A wideband sensor will offer a range of at least five volts, proving much more precision in reading the exhaust gasses. With the accuracy of a wideband O2 sensor, however, comes a little more cost and sophistication. A wideband sensor requires a heating element that must be kept at the correct temperature to provide an accurate reading.

For the MTX-L PLUS, Innovate enhanced the heater control to improve and maintain sensor performance.

“Where that’s going to make a difference is in rich applications,” continues Saez. “Sensor life will be improved. Also, in high-boost or high-horsepower applications you’ll see an increase in sensor life.”

The heater control system from Innovate is also self-diagnosing.

“If we’re not reaching the temperature we’re commanding, the system has a means to report that problem to the customer, instead of providing erroneous data,” says Saez. “We throw in an error code to make sure you’re not chasing your tail.”

The original MTX-L was developed as an all-in-one display and wideband controller package with ease of installation and customer use as a top selling point. That strategy continues with the MTX-L PLUS, which features a Bosch LSU 4.9 wideband O2 sensor. The standard-sized 52 mm (2 1/16-inch) gauge comes with interchangable black and white faces and black and silver gauge bezels that allow the user to complement any interior trim.

The MTX-L PLUS display can also switch between air-fuel ratio and Lambda. While air-fuel ratio is easily understood my most enthusiasts, more tuners are using the Lambda reading to fine-tune their applications, especially when using fuels other than gasoline.

“E85 is rarely E85,” says Saez. “It’s E70 or E65, depending on the time of year and the pump. That’s where Lambda really comes into its own. It’s always consistent, regardless of the ethanol content. Your stoich is always going to be Lambda 1.”

Even if the user prefers direct air-fuel readout, the MTX-L PLUS can be programmed with a laptop computer to adjust between different types of fuel, including alcohol—which has generated some myths about use with O2 sensors.

“Some racers are pouring as much fuel into the engine as they can,” warns Saez. “That’s when you can have an issue with wideband sensor life.”

Installation is a Breeze

Installation is rather straightforward with the MTX-L PLUS. There are four stripped wires in addition to three connectors—one of which leads to the sensor. The stripped wires are hooked up to a switched 12-volt source, a solid ground and headlight power wire. The other wire can be used for an analog input for other devices, such as a data logger or ECU. The analog output speed of the MTX-L PLUS is also now three times faster than its predacessor.

“You can daisy chain multiple Innovate Motorsport devices together through our MTS serial chain and a feed them to a recording device such as our super affordable PL-1 pocket logger,” says Saez.

Innovate has specific instructions for the sensor location, depending on the application. This is to ensure that the sensor reads exhaust gasses that have not been contaminated with outside air or influenced by the catalytic converter. Once installed, the sensor can be calibrated to compensate for sensor wear or different altitudes if racing at different locations around the country.

“Calibrating the sensor is a step you do before putting the sensor in the exhaust. It allows for altitude compensation, whether you’re at sea level or in Colorado,” says Saez, adding that most users will calibrate only once for their location. “If you’re tuning for the ragged edge and a tenth of point is important, then it’s a good idea to calibrate depending on where you’re racing.”

The MTX-L PLUS is supported by Innovate Motorsports’ Logworks 3 software package. It runs on a PC and connects to the gauge via a serial programming cable. The user can then program for the type of fuel and customize the needle bar display range. 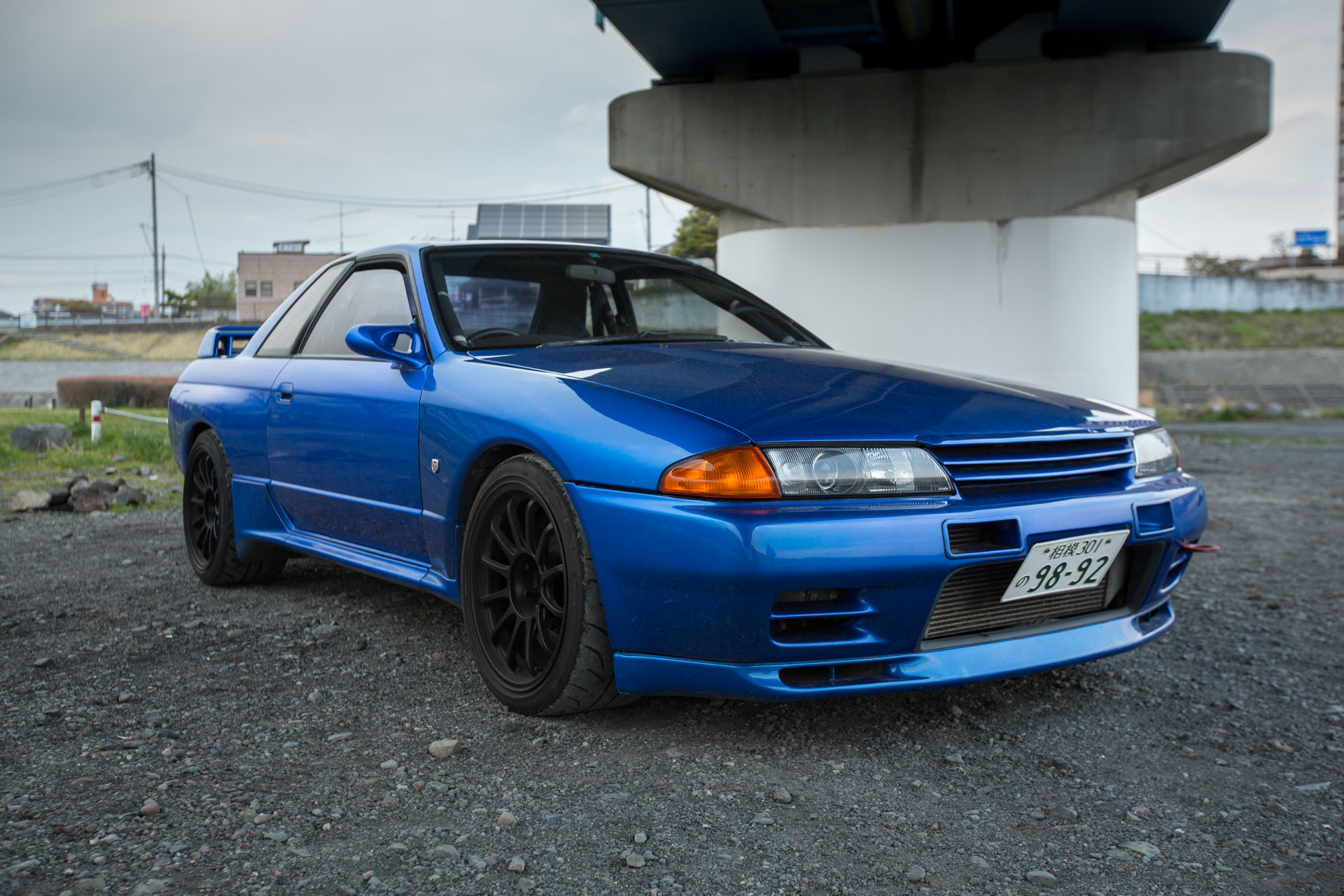 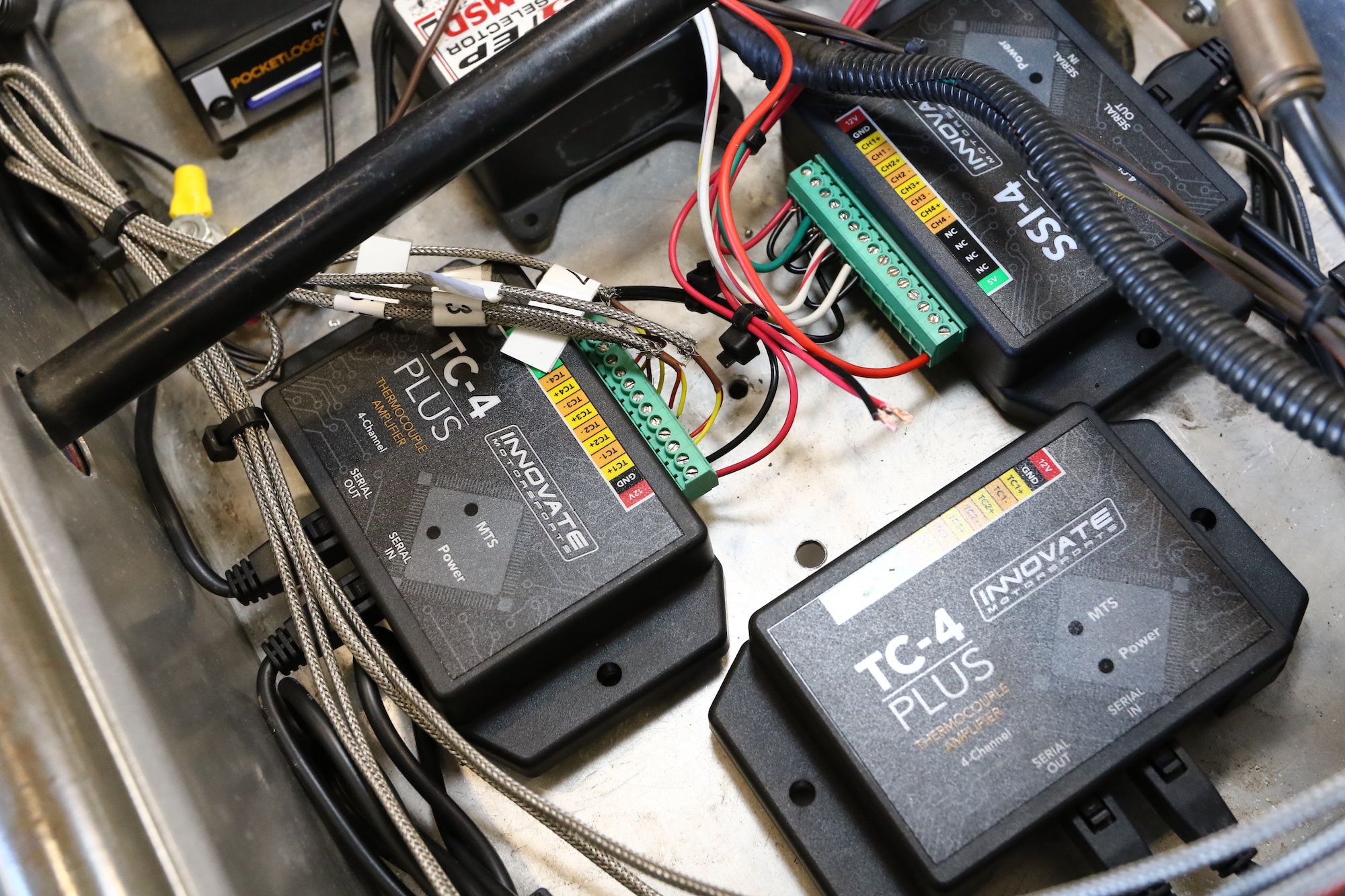 The Affordable Data Loggers - SSI-4 PLUS and TC-4 PLUS