One of the most affordable solutions to data logging just got better. Check out the improvements made to the TC-4 and SSI-4 PLUS models, including plug and play sensors.

We live in the information age—a premise that certainly hasn’t escaped the world of racing and high-performance automobiles. Connectivity is another buzzword creeping into the enthusiasts’ lexicon as competition increases and teams look for every advantage on the track and in the garage.

Two recently upgraded products from Innovate Motorsports are designed not only to provide useful information about the engine and vehicle, but both are part of the company’s Modular Tuning System, or MTS. By offering a system that allows the user to connect only the products needed to monitor and record select functions, the costs go down.

“It’s an inexpensive setup that will allow you to capture a lot of information,” says Felipe Saez of Innovate Motorsports.

Knowing exactly how the engine is performing at specific times is key to making effective tuning adjustments. Drivers simply can’t watch all the gauges while racing. In fact, some racecars, such as a Top Fuel dragster, no longer have gauges in the cockpit. Tuning and vehicle setup completely handled with information gathered with the vehicle’s data acquisition system.

“These products are here because racers needed to capture more information,” adds Saez. “They may have had a gauge, but they needed other inputs to paint a complete picture to solve any issues.”

The Updated TC-4 PLUS

Data acquisition is also a practical tool to help avoid issues before they surface. A perfect example is monitoring exhaust gas temperatures, or EGT, with the Innovate Motorsports TC-4 PLUS. It will interface with four EGT probes to monitor individual exhaust temperatures in a four-cylinder engine, or two units can collaborate to monitor a V8 engine. When teamed with the LogWorks software from Innovate Motorsports, the TC-4 Plus will display EGT on a computer screen in the dyno room.

Many myths surround EGT numbers, and the most disputed is that users can tune with EGT. The most popular notion for a gasoline engine is that a high EGT signals lean air-fuel ratio and a low EGT is the result of a rich condition [BTW, diesel engines act just the opposite]. Most experts, however, agree that tuning with EGT is imprecise at best and generally results in inconsistent performances on the track. Instead, EGT can be used to help signal a problem with intake manifold distribution problems. A difference of 50 to 100 degrees between cylinders is rather common, but if one cylinder shows 200 or more degrees different than the others, most likely there’s a problem in the intake manifold that’s not allowing for equal distribution to the intake ports in the cylinder head.

“You’re not limited to EGT with the TC-4 PLUS,” adds Saez. “You can view any type of engine temperature. We use a type-K thermocouple, which is quite common in the aftermarket.”

Basically a thermocouple uses dissimilar metals to generate a different voltage as the temperature changes. The thermocouple designed for monitoring EGT is likely to have the tips enclosed in a stainless-steel tube to avoid direct contact with the gasses and improve sensor life. However, there are open probes that can be used to monitor air temperature.

“For example, pre- and post-intercooler temps could be set up to determine intercooler efficiency,” says Saez.

Since air density is such a critical factor in today’s boosted applications, users could set up thermocouple sensors in the air inlet before the turbo or supercharger, pre- and post- intercooler locations and in the intake manifold to fully monitor air temperatures throughout the system and adjust for conditions as needed.

The TC-4 PLUS is improved over the previous version with the addition of integrated status lights, a faster internal processor and the configurable analog outputs.

“Before, it was just part of the our ecosystem [it’s compatible with all MTS series gauges and products]. With the analog outputs, now you can feed to a data logger or stand-alone ECU,” says Saez.

Updates Including Plug and Play Sensors for the SSI-4 PLUS

The SSI-4 PLUS (an abbreviation for Simple Sensor Interface) from Innovate Motorsports is designed solely to work within the MTS family of gauges and data acquisition devices. It’s primarily a clearinghouse for information gathered from up to four inputs that can be sent to the PL-1 pocket logger.

Two of the inputs can be dedicated for frequencies, such as engine RPM or a wheel speed sensor. The other two inputs can be used for 0-5 volt references, such as a MAP sensor or throttle-position sensor. It could also accept suspension-travel sensors.

“We’re able to receive any square-wave signal,” says Saez. “If you wanted to measure clutch slip, you would want engine RPM and a driveshaft sensor, then see if there is any difference.”

The SSI-4 PLUS needs to be educated on the type of sensors utilized, so the user must program the unit with the LogWorks software suite.

“The SSI-4 PLUS picks up raw output from the sensor itself,” explains Saez. “Within our LogWorks software the user can specify what those voltage inputs are. A good example is throttle position where the range is zero to 100 percent. The user enters the specific voltage at zero and at 100 percent.”

Tying information from an Innovate gauge, such as the MTX-L PLUS air-fuel ratio meter, into a data acquisition without supporting intelligence isn’t going to help a racer or tuner.

“You can’t race and look at the air-fuel gauge at the same time, but you can send the numbers directly to the data recorder. If you record just air-fuel ratio and look at the log, you’re going to see a line go up and down and not know when the change occurred,” explains Saez. “By adding the SSI-4 PLUS, you’re able to capture the engine RPM. At minimum you want engine RPM as a reference point to indicate what actually occurred during that run.”

With the SSI-4 PLUS, racers can add other data like manifold pressure and temperature to get an even clearer picture of how the engine is responding to changes at different RPM.

“It’s a perfect add-on piece for a user who has just gauges,” says Saez. “You’re not paying for features you don’t need. We don’t care what sensors you use as long as they meet our input requirements.”

The SSI-4 is also useful for nitrous applications. It can be connected to a sensor to monitor bottle pressure and also record the solenoid activity. Again, when matched with engine RPM the user has pertinent information for tuning and pre-race adjustments.

Like the TC-4 PLUS, the SSI-4 PLUS is an improved version with upgraded processor and new integrated status LED lights. It connects directly to the PL-1 pocket logger to record data for easy retrieval on a laptop.

To eliminate ground offsets in the signal that can introduce measurement errors, the external connections on the SSI-4 PLUS are fully differential. That means that each input has a separate reference ground. Since an electronic device can only measure a voltage referenced to its own ground, problems can arise if there are differences between the ground point of a sensor and the ground point of the SSI-4 PLUS unit.

However, the SSI-4 PLUS can “recreate” sensor signal’s ground reference as if this input were referenced directly to that sensor’s ground—thereby reducing the chance of inaccurate readings. 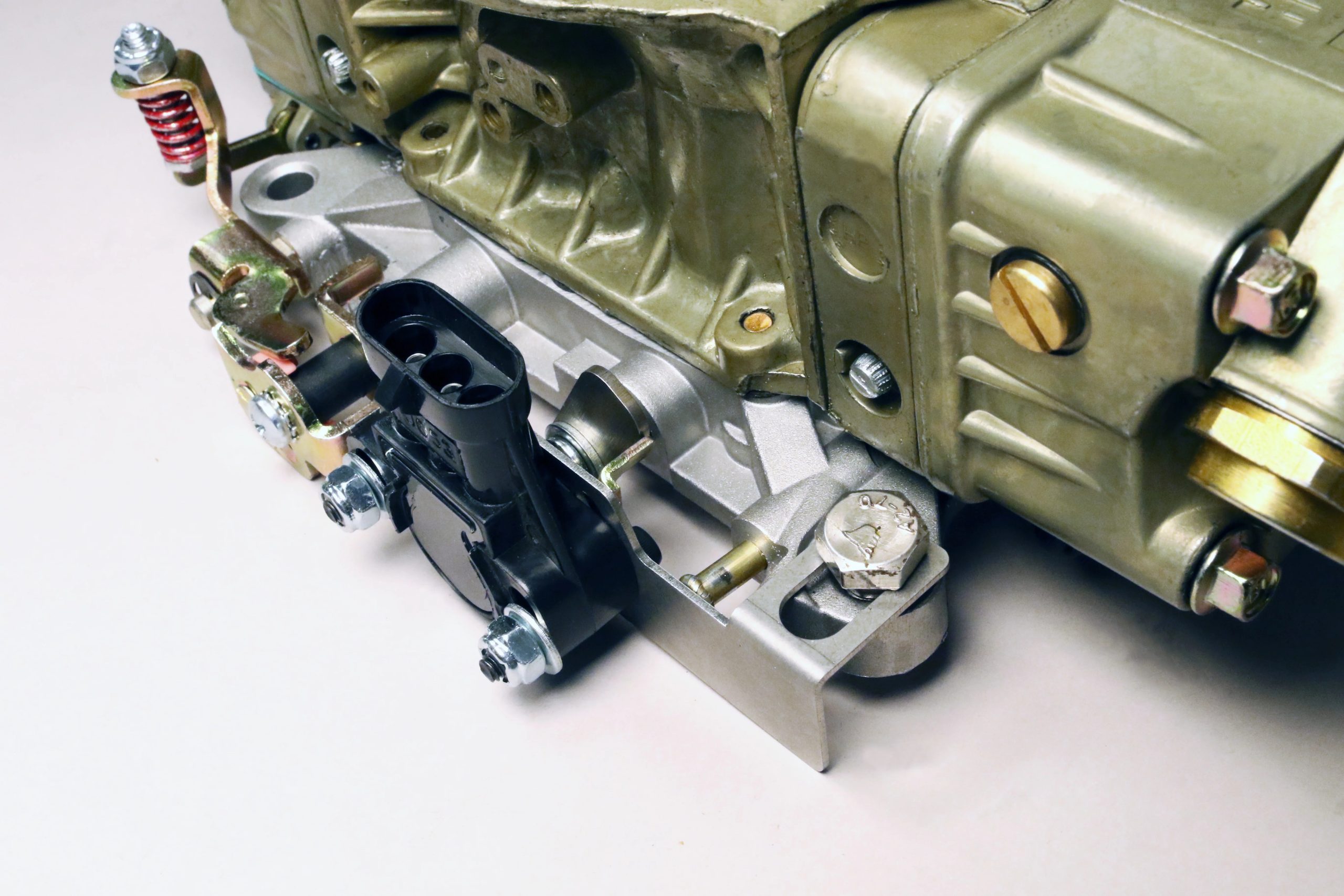 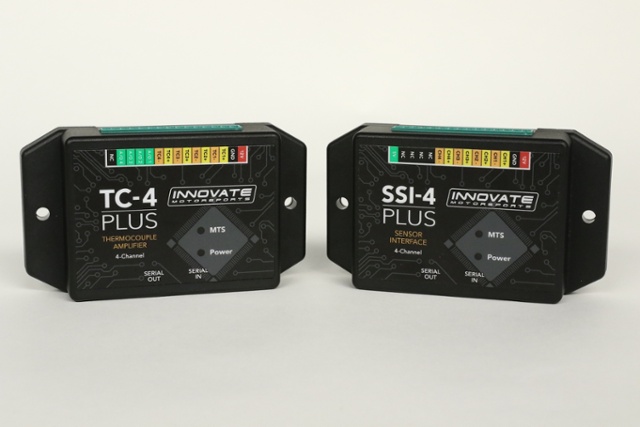 Inside the New Innovate TC-4 and SSI-4 PLUS