Peering Into Fire in the Holes

By Mike Bumbek
PhotosCourtesy of Pedigo Performance and Innovate Motorsports 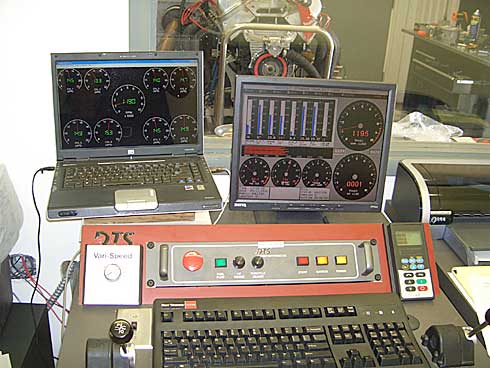 After 25 years in the auto repair business Tracy Pedigo thought it was time to retire and do something a little different and more closely related to his other occupation of sportsman drag racer. Since engine tuning and dyno-equipped shops were pretty scarce in his part of the world, he decided to put in a first class effort into starting one up. Stepping up to the trade involved getting the tools, and before you could say soapbox Tracy was standing up on his own about what using the latest tools of the engine-tuning world had enabled him to find. Pedigo Performance has quickly become known as the destination for squeezing the maximum amount of juice possible out of any given setup by being able find the ultimate jewel in the engine tuning treasure chest â€” hidden horsepower. These days Tracy has got it covered on water and on land tuning engines for the likes of Darell Wikle out on the 1320, and Duane Oblander over water.

A case in point was a professionally built 505 cubic inch drag boat big block Chevy that for some reason or another was an underperformer. Everything should have been right on, but was way off. Tracy’s first move was to bolt it up to the DTS engine dyno and run a safe low rpm pull to see what was going on. Using a dual air-fuel ratio sensor bank-to-bank sampling of the air fuel ratios down at the collectors, he was able to see that things were a little lean. A look inside the race-prepped carburetor revealed a set of 95 jets already doing the job. A step up to 98 jets and another safe pull managed some more power, but still

registered a bit on the lean side with a bank-to-bank reading of air fuel ratios. One by one the variables were eliminated. First the fuel was replaced with some unleaded premium to eliminate the possibility of ethanol messing with the mix. Next was a step up to 100 jets. All vacuum sources were checked and double-checked. The next pull got the air fuel ratio closer, but still not where it should be.

Even though the motor was posting decent HP Tracy wasn’t satisfied and still felt as if there was a problem, so he hooked up an Innovate ST-12 to monitor the air fuel ratio at each one of the cylinders.

“When I hooked up the Innovate I saw that some cylinders were in the high 15 range and some were in the 11 range, and it was just all over the place. It was kind of random, but there were a couple of cylinders that were going to suffer some serious damage if we didn’t take some action,” said Tracy.

To get to the bottom of the problem Tracy decided to take the shop’s known good carburetor and bolt it up to the big block. A subsequent pull netted an additional 40 hp. Since the individual air fuel ratios flattened out across the cylinders, Tracy and crew determined they had found and solved the problem, along with releasing some hidden horsepower.

“All I saw was a 40 HP difference on the dyno. With the ST-12 we saw why it was different, and saved an engine,” said Tracy.

And this is not an isolated case. Tracy has found that by using the Innovate ST-12 to monitor the air fuel ratio in each cylinder allows him not only to save engine damage, but to find the engine’s sweet spot â€” where it likes to make maximum horsepower. While a bank-to-bank dyno pull will give an average of air fuel ratios across a bank of cylinders, the ST-12’s wideband oxygen-sensor controllers tell the absolute story of each combustion chamber. While it may seem impossible, a carburetor can indeed starve an individual cylinder of fuel, even with a single plane open plenum intake manifold. Since a bank-to-bank reading averages readings it simply cannot find this kind of problem.

Once the engine goes out of the shop and hits the track, Tracy relies on an Innovate LM-1 and LMA-3 AuxBox kit for monitoring and logging additional inputs under real time, real world, race conditions. The differences that variables such as under-hood temperature, altitude changes, ram air from a hood scoop, an air pan under the carburetor, or spacer can have on the air fuel ratios, can be recorded and logged. The LM-1 data logs can then be e-mailed back to Tracy for analyzing against previous dyno pull logs, or analyzed on track using Innovate’s LogWorks software. Being able to figure out how variables affect performance is the name of the game. These days Tracy is happy tuning engines and racing his 602 cubic inch fuel injected 2002 Firebird in Super Gas. Along with his clients, Tracy has helped his local buddies get several Super Gas, Super Street, and Super Comp cars running pretty sweet, and truly believes that wide band air fuel tuning technology is the biggest tuning innovation since the timing light.

“We’ve had a lot of success by tuning with air fuel ratios. I think that if I have had to learn to do it by reading spark plugs, or EGT’s, or the old school methods that these guys are still employing, I would probably be missing the boat on a lot of these tune-ups, and I think I’m nailing them,” said Tracy.

For more information on Innovate products, visit www.tuneyourengine.com or call 949.388.4442.